In an age when developments began to witness a steadfast growth in all fields, including the urban one, due to information and technology revolution; when the right to a decent life also became a matter of humane demand that is comprehensively and imperatively applicable to all peoples, including the peoples of the third world. The results and reflections of such as the above have led legislations, including the Iraqi legislation, to add a sort of regulations to the architectural designs, for the latter constitutes the highest image of property- a highness which stems from its connection to that which humans hold most high, namely the “Mind” in its creative and intellectual manifestations. Furthermore, the rights stipulated have become a weapon and competitive tool to protect the intellectual rights of architect, which is to encourage innovation and creativity- a goal that requires the presence of legal entity that manages to identify and protect these rights.That said, this research has been devoted to a substantive and significant matter, which is the legal regulation of the architectural designs and its designers, given that it is an essential safeguard for these designs and designers. The importance of this right is increasingly growing in the international conventions, yet the decisions of the Iraqi legislature stipulated in the Copyright Protection Law No. 3 of 1971, along with its amendments afterwards, remains just ideas and simple signals without careful regulations that commensurate with the significance of the architectural designs- which is something that should be taken seriously especially when taking into account that the issues associated with the right of the architect did not take its share so far in the legal sources. What is more, the scarcity of these legal sources did not create possibilities that would lead to evidence substantiation with other researchers’ findings. 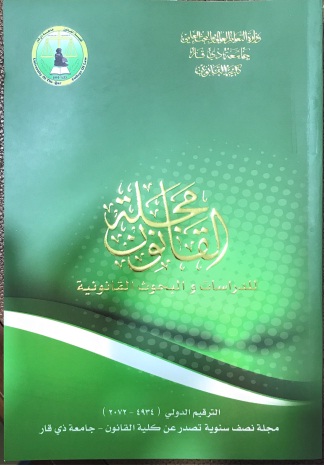